The Weekly Geek assignment is a lot of fun to do. This week Dewey has the participants doing this:
1. Choose a writer you like.
2. Using resources such as Wikipedia, the author’s website, whatever you can find, make a list of interesting facts about the author.
3. Post your fun facts list in your blog, maybe with a photo of the writer, a collage of his or her books, whatever you want.
Being Danish, I want to write about Astrid Lindgren, although she was Swedish and not Danish. Her fairytales and stories has been translated to almost all the languages in the world and are still being read over and over and over again. My favorite Astrid Lindgren-stories are:
1. Brothers Lionheart. This is the story about two brothers who both die young and what happens after they are dead and meet each other in the land of Nangijala.
2. Pippi Longstocking. I just love Pippi. She is the original girlpower-girl. And imagine living in your own villa and owing your own white horse with black spots.
3. Emil's Pranks. About naughty boy Emil, who cannot help himself and always end up making pranks, even when he is trying to do something good.
4. The Children of Noisy Village. Oh how I wanted to be a part of the children in Noisy Village and all the fun they had. 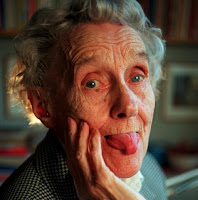 Astrid was named the world's best known Swede and she said: You have given this award to a person who is ancient, half-deaf, half-blind and completely nuts. We better hope no one finds out :o)

I do have some facts about Astrid Lindgren as well. Actually, I have more than I think I will write here, because there is a lot about her on the net.
November 14. would have been Astrid Lindgren's 100th birthday. She died in 2002 and was buried, as per her own request, on March 8., the International Women's Day. Astrid got pregnant when she was 18 years old and had to leave her son, Lasse, with a foster family in Copenhagen. A few years later, she was able to take him back home to Stockholm. Astrid Lindgren used to lie down in her bed with a pad of papers and write from early morning, 5-6 AM and until midday. Evenings were spent thinking about what to write next morning. It was her daughter Karin, who turned 10 in 1944, who invented the name Pippi Longstocking. For Karin's 10 year birthday, Astrid Lindgren wrote the first Pippi-story. And when she met Sonja, Karin's classmate, who had red hair and freckles, she decided, that that was what Pippi was going to look like. Later on, child actress Inger Nilsson played Pippi in a much loved series. 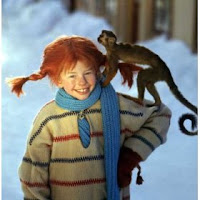 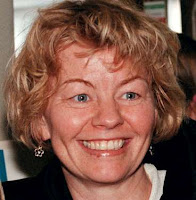 Top is Pippi with her monkey Mr. Nilsson and bottom is actress Inger Nilsson who played Pippi and what she looks like today. 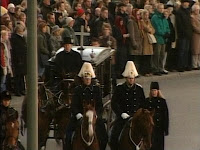 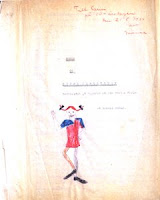 The images from left to right: Astrid Lindgren and son Lasse, her funeral in 2002, Astrid Lindgren writing in bed and last image is the front cover of the first Pippi-story. All four images are from the book 'Astrid Lindgren's life in pictures' by Jacob Forsell, Johan Erséus and Margareta Strömstedt (I know it is available in Swedish and Danish, but not if it can be found in English)
I recommend all Astrid Lindgren-stories for both kids and adults. The are wonderful.
This is also my post # 9 in the NaBloPoMo-challenge.
By Louise kl. 6:38 AM

What a wonderful post! I love the picture with her tongue sticking out.

Thanks a lot for your comment softdrink :o) I had to put that image of her here. She sort of looks like that famous one of Albert Einstein, don't you think?

Just read your Weekly Geeks Post Louise. Talk about inspiration! Pippi was mine growing up and I passed her (pre-women's lib) girl-power mind set to my three daughters. Jacqui

Jacqui, that is a fantastic thing to do - raising your daughters to be (a little) like Pippi. One can only admire Fab Pippi and her antics and although her tales may be for kids, I still LOVE to see the old (Swedish) Pippi-films made with the sweet Inger Nilsson I mention in my post as well. Pippi-power rocks!

I loved Pippi Longstocking as a kid, and loved reading it to my boys. Never thought to look for more books by Lindgren! Thanks for the post.

Hi!
Great post! Now I'll have to add some more books to my TBR list! Oh well, gives more reasons to read. Thanks for stopping by my place. Take Care!!

Greatly informative and fun to read post! I absolutely loved The Children of Noisy Village. Such a great children's lit.
*smiles*
Kim

Wonderful post! We love Pippi here, but I, too, never thought to look for others! Thanks!

Hi! This is Skooter from Pink Blue Whale, who also did her WG about Lindgren XD.
You know so much more than I do about her! Dutch websites had slightly more information than English but I suppose I can't beat Scandinavian languages ^^.
Still makes me happy though, because I love her so much ^^.

@ Ali - if you have young kids (and even if you don't) I highly recommend Brothers Lionheart. It is a must-read. Not fun and girlpower-ish like Pippi. But good. Very good.

@Splummer - you are welcome. I found your post about James Patterson interesting, as I know the author myself (not know him like that, but I've read a lot of his books)

@Smallworld - I found good inspiration in your post about Chimamanda Ngozi Adichie. Even the name is interesting!

@a beluga - Yeah, I guess I had it a little easier than you finding out facts about A. Lindgren ;o) But you could try reading some Danish sites - I think we use many words which are the same in Dutch and Danish ;o) And how funny that we both wrote about the same author. She did have quite and impact on my reading habits and skills.

Thanks for all your comments, it is very much appreciated.

Bogsider, my kids are 8 and 11, and both boys. Too old for Brothers Lionheart, do you think, or about right?

Hi Ali, your sons have the right age for that story - if you don't read for them anymore, they can read it themselves, or at least the eldest one can. The brothers in the book are about the same age, or the little brother is. The older brother is, well...older :o) I'd actually say that it is not a story for kids under 7-8. It deals with some heavy things, but in such a good way. Its a wonderful story. You could also read it yourself ;o)

We still read aloud together every day. :-) I'll definitely look for this one next time I'm at the library. thanks!

Wow, what a great post! Love all the images too.

what a fun post! i loved Pippi Longstocking when i was a child.

Chris and alisonwonderland: Thanks a lot for your comments about this post.