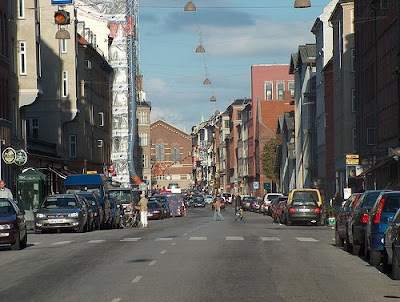 can still smoke cigs and get a cheap beer mixed with trendy cafes and fashionistas and families with strollers give my neighborhood a ver distinct flavor that I would not miss for the world. I think author Sara Blaedel manages to paint a fair image of my neighborhood in that book, Aldrig Mere Fri. The title is somewhat not really translateable, but it means something along the lines of: Freedom - Never Again. I think I'll finish that read during the week and then hopefully manage to continue with my serious reading for my thesis and also be able to read another mystery/crime that I have waiting on my shelf.
The image is of the street Istedgade, which is the main drag in my immediate neighborhood. The image is from my own photostream at flickr.
By Louise kl. 8:05 AM