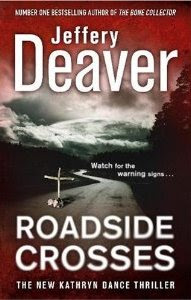 Roadside Crosses by Jeffery Deaver is book # 2 in a series featuring special agent and body language expert Kathryn Dance. I didn't know that there was a # 1 when I got this book, and it did not really matter.

Roadside crosses are found appearing along the roads and highways but before any accidents/deaths happen and thus signalling that something bad will happen. Kathryn Dance and her colleagues are baffled at first, trying to find a link between the victims, and when only a controversial blogger's blog appear to be the only link, a computer expert is being brought in to help the agents.

The blogger is not too helpful at first, but after a suspect goes missing, Kathryn Dance puts the pressure on the blogger, and things begin to move forward. Roadside crosses keep turning up, and soon we have the race against time, a lot of suspects and a story that moves forward with a good speed.

At the same time Kathryn has her own battles to fight, trying to get over her husband's death some years before, dealing with her parents, especially her mother, and another case that her mother seemingly is getting involved in.

Don't really know what to say about this story. It sounded very promising mixing murder and bloggers and blogging. And it is not badly written. The plot is surprising. Fast and entertaining read. But somehow the whole thing wasn't really engaging me, and I felt slightly irked by Agent Dance and her bodylanguage-reading and her family. Not sure I'll read more Kathryn Dance-books.
By Louise kl. 9:35 AM 9 comments: Links til dette indlæg 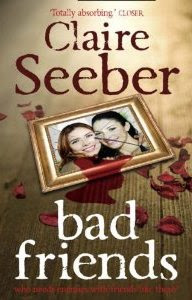 I bought Bad Friends by Claire Seeber somehow thinking it was YA. I had even placed it on my YA-shelf, and when I picked it up last week to read, I was also sure it was YA. Until a few pages in when the drinks began to flow and the cigarettes were smoked. Then I checked the back, and no, it's not YA. Don't know where I got that idea, but I blame Amazon, putting it in one of their: If you liked [insert YA-title here] you may also like Bad Friends.

Anyway, its a psychological thriller and it is not half bad. It also has a good deal of chick lit in it, and all in all I found it to be a nice, light read. Once I got used to the fact that it was not YA.

Maggie leaves her boyfriend, the hard drinking Alex with a troublesome father, in a parkinglot, and goes back to London in a huff and with a broken heart. The bus she is on is involved in a horrible accident, and after Maggie's recovery, she goes back to work to find out that there are certain things she is deliberately blocking from her memory. She does not really suffer from amnesia, because early on the reader detect that Maggie is aware of all the "secrets" being referred to, but we are not told. This annoyed me, but on the other hand it also made me read more, because I wanted to find out what it was Maggie had done that was so terrible, giving her boss the right to demand that she stays in her job, which she hates.

Maggie also meets a new "friend", another girl involved in the accident. This girl, Fay, keeps turning up at the most weird times, and she gives Maggie the creeps. Pretty soon it becomes clear that someone is stalking Maggie, sending her funeral flowers and creepy texts, and Maggie's life spirals out of control. Furthermore she has to deal with Alex, her ex, and with a new love interest. And her father, and the death of her mother many years ago and much more.

Bad Friends is an easy read, and fine for a quick summer read.
By Louise kl. 11:55 AM 4 comments: Links til dette indlæg

While I Live - The Ellie Chronicles I by John Marsden

While I Live is the first book in the Ellie Chronicles which is sort of a sequel to John Marsden's Tomorrow-series (the link is for my review of the first book in the Tomorrow-series). I really loved that series, and wanted to read more about what happened to Ellie, Homer, Lee and the other friends and enemies after the war ended. So far, so good.

While I Live did not completely live up to my (yes, they were hígh) expectations, but it wasn't a complete waste of time either. Ellie is back on the farm with her parents and trying to live as normal a life as possible with school, farm work, friends and speculations about love and boyfriends. Not easy, considering what she went through during the war, but she's trying and things go okay.

Rumours at school and in the town of Wirrawee are rife. It seems like certain cladestine groups have taken it upon themselves to find people still missing from the war and, if and when they find them, liberate them. Ellie is too busy and caught up in personal problems to pay much attention at first, but after a while certains things do that she knows that she has to investigate what it is that goes on.

Even though the book begins with a very dramatic scene, I didn't feel that anything apart from page after page about farming and cows was really happening. I had to read more than halfway until there was some action. And while the character descriptions are good as ever, there were also things which didn't really make sense to me. I know its fiction, so I am prepared to accept many things, but still some things didn't feel right. I am going to read the other two in this series, not because I was blown away by this one, but because I want to know what happens to Ellie and her friends and because even though I have to admit that I found While I Live rather boring, I am not completely turned off.
By Louise kl. 8:20 AM 4 comments: Links til dette indlæg