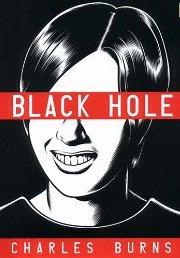 Black Hole is a weird grapic novel about teenage angst and alienation. We are in Seattle in the 1970's and high school kids do whatever it is highschool kids has always done and probably always will do: fall in and out of love, argue with their parents, drink, party, experiment with drugs and sex, skip school etc etc. There is a catch though, because some AIDS-like sexually transmitted disease is spreading among those kids. You do not die from it, but you mutate in different ways. Some mutate so much, that they have to hide from view and flee to the woods where they set up a camp, while others only develop certain things like a tail (!) or an extra mouth; things that can be hidden beneath clothes.

There are many layers in this horrorlike story, and I asked myself if those mutated kids had to flee because their parents could not be allowed to see that they had caught the disease, thus letting the parents know that they had had sex? Or was it something else that made them flee? Humiliation? A mix? Because no one seems very happy in this dark graphic novel, which also has some humor running beneath all the horrors though. Some of the mutated kids fall in love with each other, but even out in the woods away from people staring at them and pointing fingers, they are not safe at all, and there might be a killer among them.

They never really talk about the disease or where it came from, it is just something which is there and something that some catch to a greater or a milder degree. Very weird. We follow a handful of different people in this odd love story of sorts, and I was quite taken with the whole thing, although some of it was very nasty to read. But a very good graphic novel!
By Louise kl. 10:37 AM