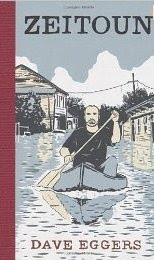 I usually do not read non fiction. I have nothing against non fiction at all, it just almost never happens that I feel any urge to read a non fiction book. But this one - Zeitoun by Dave Eggers - I had to read.

I visited New Orleans in the summer of 2004, a year before Hurricane Katrina, after having saved up for the trip (remember, I live in Denmark and there is a long way down to New Orleans from here and it's expensive) for a long time. Also visiting was an old dream that finally came true. The visit was part of a larger US-trip, so I did not get to spend more than four days in New Orleans, but I loved it. The heat, the humidity, the depravity, the ghost stories, the building, the history, the food, everything.

When Katrina struck in 2005 I was on vacation in Berlin, Germany, and remember feeling completely devastated hearing the news from New Orleans. First I thought mainly about all the wonderful buildings submerged by water, but when the other news began pouring in after a few days, I became even more shocked and sad. In hindsight, we now know that all the murders, rapes and looting did not take place in the scale the media presented us for, but we didn't know back then. It took me a long time to get those images out of my mind, and I don't even have friends or families there. I can't even begin to imagine what it was (and is?) like for people who live there and were there during the hurricane.

Anyway, I have been wanting to read Zeitoun for a long time, and when it came out in paperback, I bought it. And when the 5 year anniversary was around the corner, I sat down and read it. Zeitoun is the name of a Syrian American man, a repected citizen of New Orleans, who decides to stay back in the city during the hurricane, even though his wife and children has fled the city to go live with relatives out of harms way. Zeitoun wants to keep an eye out for his properties, and when the levees break and parts of the city become submerged, he ventures out in his canooe, managing to save both humans and animals in the horrible aftermath of the hurricane. And he does so with a "light heart", feeling that there is a deeper meaning behind him staying back.

Wife Kathy begs for him to leave. She sees and hears all the horrible stories of murder and mayhem from the media, and she fears that something will happen to Zeitoun. When she looses contact with him for a longer period of time, this family's real nightmare begins. It is hard to imagine that this is a piece of non fiction and that those events took place only 5 years ago. The story is told in a voice which does not criticize or judge neither "sides", and that made it worth reading. The first third of the book was a tiny bit too "lecturing" for this reader's taste since I felt I already knew about some of the issues, but that is a minor detail. I highly recommend this book. Great and thought provoking non fiction.
By Louise kl. 9:14 AM

The big memory I have from Hurricane Katrina is watching TV and hearing a general explain, after being asked why they hadn't improved the levies when they knew they wouldn't withstand a hurricane like this, "We did a cost-benefit analysis thought it wasn't worth it." Ha! Cost-benefit analysis. Nice to know what people's homes and lives come down to for the US Government.

I have been meaning to read this book for some time. You did a great job of convincing me to open it up now and step back in time. Unfortunately, it's a story that is relived again and again in flood prone areas. What we may be able to take away from reading Zeitoun may be ways to prevent this kind of devastation next time- maybe this is why there was a bit of a "lecturing" tone to the prose.

Thanks for the review - I'll definitely be adding this to my To-Read pile. I'd never heard of this account before.