What is Mine by Anne Holt 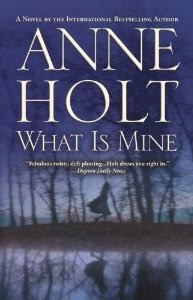 What is Mine by Norwegian author Anne Holt is the first book about lawyer Johanne Vik and detective Adam Stubo. I have already read the other one, What Never Happens. I grabbed this in my local supermarket for a quick summer read, and I will say that Anne Holt delivers. I finished it in no time and enjoyed the plot and the dialogue and the character development.

A little girl disappears and despite her father's frantic search, she has apparently vanished without a trace. Adam Stubo is on the case, and when more children disappear it becomes clear that a serial abducter is at loose. At the same time Johanne Vik is being summoned to an old sick lady's house, where she is being told an amazing story: the old woman who is dying and used to work in the Norwegian law system has not been able to forget a case from her past, where a man was convicted of killing a young woman. She feels that the case was never solved in a satisfactory manner, and asks Johanne to investigate.

Later, Adam sees Johanne on tv (this is the book in which they actually meet), and goes to see her personally, asking her to help out with the case of the missing children. Johanne has worked with the FBI when she was young, and Adam feels that her insights into behavioural patterns may be a help in his case.

The story is well written - I read it in Danish and do not know how it translates into English, but if you are a mystery lover and like the Scandinavian style, I highly recommend this one. I recommend it more than the number 2 in the series (actually, don't know if it is a series, but at least there are two books) where I found some of the dialogue rather forced. In this one it flows and the plots are well thought out and tight. Great summer read.
By Louise kl. 4:46 AM

Ah, finally a proper mystery for you. ;)

I´ve enjoyed both the books thoroughly and I really like Stubø, but Johanne Vik is a bit whiny. She gets better in the third book, though.

Dorte, do you happen to know what the third book is called? I have found one which states it is the fourth book, but so far have not been able to find one called the third...Will post this question on your page as well.

There have been a lot of excellent Norwegian mysteries translated into English lately. I'll have to look out for this one.

Oh I think this one sounds so good!

oh, I love Scandinavian mysteries..sadly in English though. I am not familiar with Holt and will have to see what is available.

Oooh. I'll have to keep my eye out to see if the series gets translated.